Giving you the Edge in Business

Tired of scrambling around the provincestate collecting paper time sheets at payroll cut-off?

Field workers use a laptop or tablet to enter their time sheets. Supervisors review and approve the time sheets on-line. Upon approval, these time cards are visible and available for correction and processing in Logger's Edge. It's that easy!!!!

Bring your business information to a whole new level of efficiency and accountability with Caribou's Logger's E-Time. 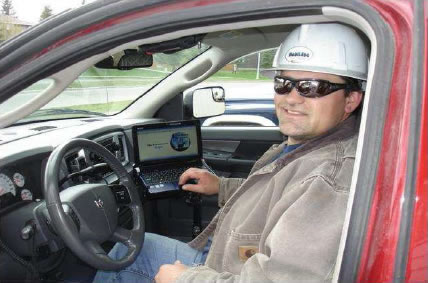 What makes Logger's E-Time such an obvious next step? 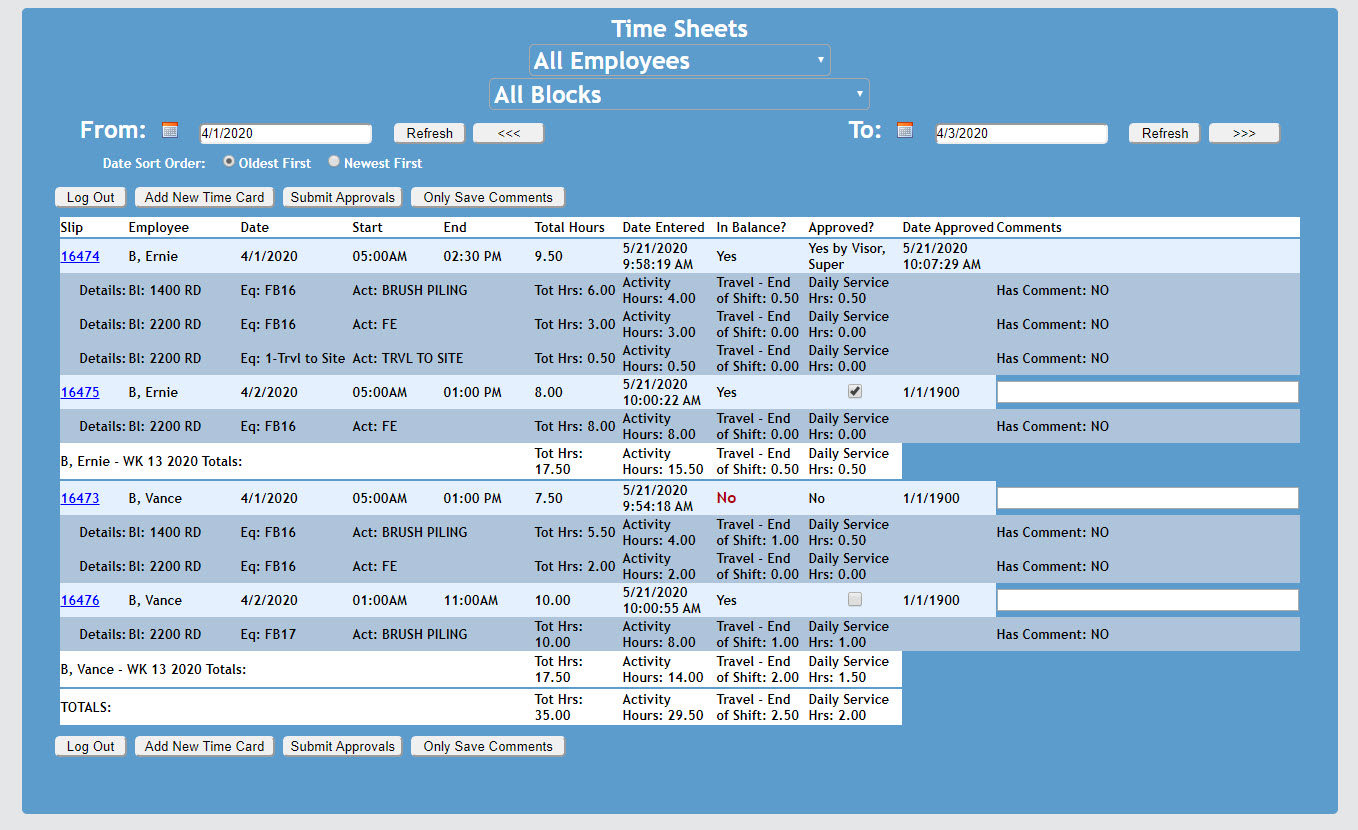 Supervisors can log in and see all time sheets for all employees whom they supervise. They can review/edit and approve the time, or send it back to the employee for correction. Once approved, time sheets are visible in Logger’s Edge (and can still be edited in the office if necessary, even after approval).

Daily time sheets have header information that includes the shift start and end time. The software calculates the hours of the shift, and enforces that the hours on the details section of the user’s time sheet add up to the full shift.

Not only can you capture different types of hours, you can also capture, things like Kilometers and Living out allowances.

Lo-Bar Log Transport Co. Ltd. has been a long-time user of Caribou’s Logger’s Edge system, relying on the system for over a dozen years to calculate gross payroll for both hourly and load-based employees, as well as to streamline their block costing, truck cycle time reporting, BC Fuel rebate reporting, and even basic machine repair and expense record-keeping.

For the last dozen years, Lo-Bar has imported load tickets from their main customer, Canfor and entered time sheets for their 90+ employees. While the load ticket import process was and remains very efficient for Lo-Bar, the time sheet process was a different story altogether.

For starters, employees were only required to submit their paper tickets on a weekly basis to the supervisors, which meant that the information was not always as reliable as if they completed the time sheets daily. Plus, there was always a scramble at the end of the pay cycle to get the paper copies into the office for data entry. On top of the stacks of time sheets, the supervisors also kept daily logs on the crew members at their job locations each day, which the office staff had to cross-reference with the worker’s time sheets and sort out any discrepancies with the supervisors. With the growth in number of employees, the whole process had frankly become stressful all the way around.

About three years ago, Lo-Bar decided to give Caribou’s E-time digital time sheet tracking system a try during spring break-up. The office staff used the down time to do some tutorials at the shop and in camp on the new system for the field guys. They rolled it out to a crew at a time, and within a matter of weeks, Lo-Bar had the majority of their guys entering their own time sheets on a daily basis using either a laptop in camp, or their cell phones or tablets. The supervisors were, in turn, able to review and approve the time sheets regularly from their laptops or tablets. Once approved, the time sheets simply appeared in Logger’s Edge, and the paper chase was largely solved.

Administrative review and double-checking is, of course, still a core part of the process in the office, but the mad scramble to enter stacks of time sheets has been eliminated with the new process. It has also eliminated the need for the supervisors to keep daily logs because they can simply review time sheets online each day for the day prior, while the work is fresh in everyone’s minds.

“The first couple payroll cycles were a little weird for all of us, without all the stacks of paper to file at the end of the period,” acknowledged Holly Bliss, who heads up the administrative team in the office. “But once we got used to it, it’s been so much more seamless than our old process.”

While the process is still not perfect, it’s a vast improvement over their paper process, and has introduced notable cost savings along the way. Holly reckons that implementing E-Time has easily shaved a day off their entire payroll process every pay cycle, not to mention the $1,500 - $2,000 a year spent on printing the physical carbon copy time sheet booklets.

“It took us awhile to make the decision to adopt E-time – change can be intimidating,” admits Holly. “But the Caribou support team is really helpful and responsive and made the change more manageable. Perhaps if we had realized how easy it would be to implement, we would have done it sooner. Either way, we can’t imagine having to go back to our old paper chase.”
~Holly Bliss, Lo-Bar Log Transport Co. Ltd. - Prince George, British Columbia

“We are a Heli-falling operation located in Duncan, BC, and we have projects scattered throughout remote areas, most of which are only accessible by float plane or crew boats. Before we adopted E-time, we relied on the supervisors entering time sheets into Excel spreadsheets, that were then shared with the office via Dropbox. Once the time sheets appeared on the office computer, the time sheets would be re-keyed into project spreadsheets to report on total man-days, hours and productivity statistics.

We adopted both Logger's Edge and E-Time in the Winter of 2018, and it has streamlined our processes and gives us much more timely data. Our supervisors enter the crews' time daily on their ipad or their laptop. Because the internet connections are often slow and unreliable, Dropbox would sometimes have trouble sending Excel files which meant that the supervisors would often prefer to wait until the cut-off to get me the data. With E-time, the time sheets transmit much better and the supervisors are much better about getting the time in on a daily basis.

What is a big time saver for me is that I now have mandays, hours and productivity stats by simply selecting what I need. I just log onto E-Time, review and approve the time sheets, and then my time sheets appear in my Logger's Edge system. I do all the reporting I need to do in the Logger's Edge. No more duplicate data entry into all sorts of Excel files, and no more scrambling at the end of every pay cut-off to get the data re-keyed.

“We adopted E-Time a little over a year ago with the goal of eliminating our inefficient collection of paper time sheets from our field workers for manual re-entry by office personnel. Our guys now enter their time sheets from camp, from home, or from the job site if they have a wi-fi connection or cell service, and our office personnel can process it through Logger’s Edge with no data re-entry and no mad scrambles to collect all the paper time sheets at the end of each cut-off. We are probably saving about 10 collective hours per pay period now, compared to our old processes.”
~ Gord Chipman, Alkali Resource Management, Ltd. - Alkali Lake, British Columbia

Isn't it Time to Rethink Your Time Sheet Process?